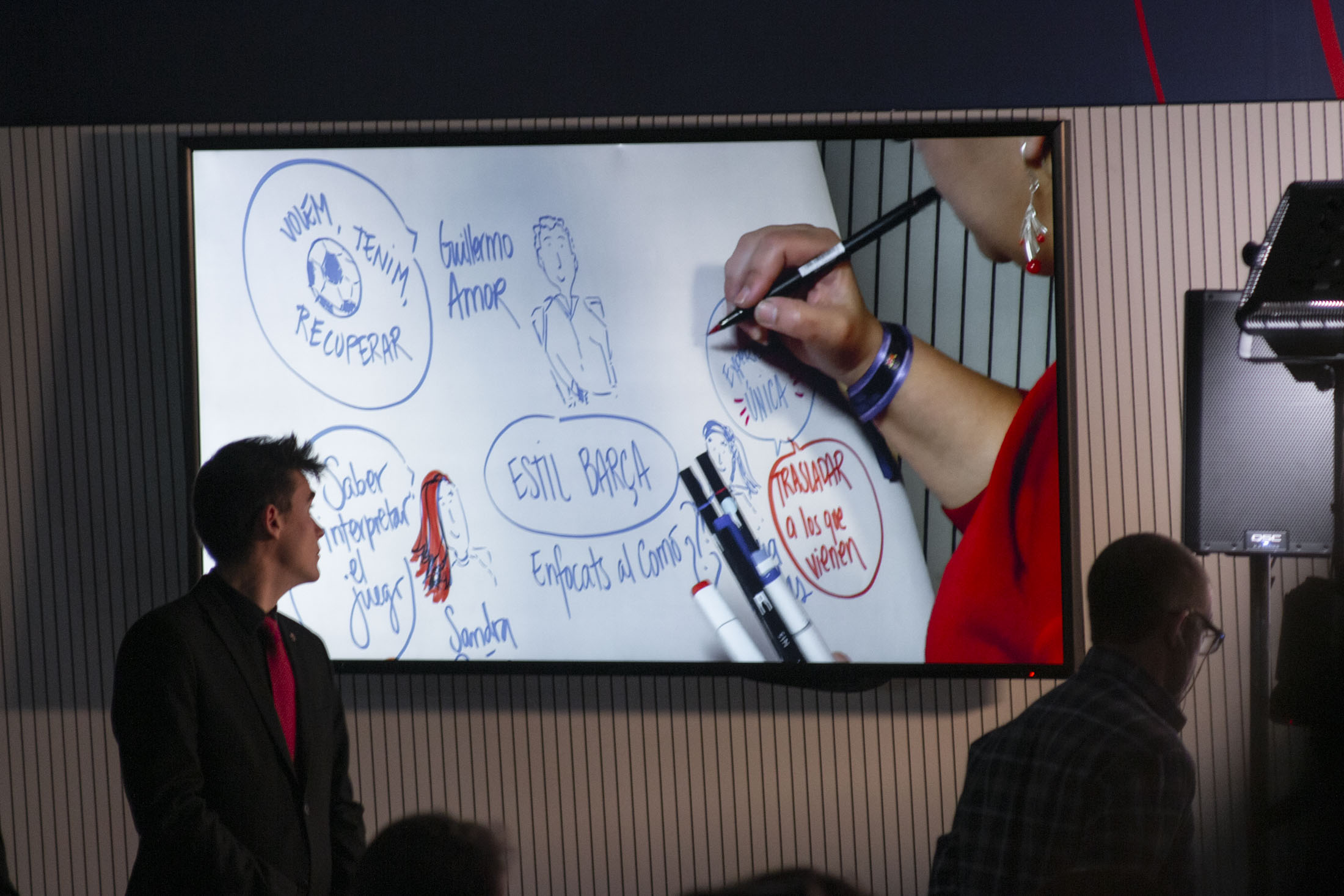 FC Barcelona celebrated International Women’s Day by organizing an event: “Barça: Femení, Plural”, on March 8th, 2019 in their Camp Nou Auditorium. The purpose of the event was to honor women in sport and give visibility to Barça female sports players. Thus, the event’s main objectives were to:

Throughout the event, Alexandra Etel (visual storyteller and innovation architect) created real-time visual storytelling that used illustrations to summarize the words of speakers at the event in a clear, concise, and visually engaging manner in three languages: Catalan, Spanish and English.

The first speakers whose words we visualized were Josep Maria Bartomeu (President of FC Barcelona) and Maria Teixidor, Secretary of the FC Barcelona Board of Directors and president of the Edelmira Calvetó Group. Their welcoming remarks highlighted that there is a current and pressing need to give more visibility to women in sport, show their challenges, and learn how to help them.

The next two sections were round tables. First was the panel named “One Style, Various Paths», was formed by three people. One was Guillermo Amor, Director of institutional relations, head of men’s youth football, and a former football player for FC Barcelona. Accompanying him were female FC Barcelona football players Sandra Paños and Alexia Putellas. As shown on the first visual storytelling board, their discussion highlighted that it is important to always keep moving through the game, regardless of the challenges and setbacks one faces.

As a part of the «Brand in Feminine» chapter, two powerful women gave inspiring talks. First, “Brave Brands” was presented by Gemma Cernuda, an expert in women’s branding and communication. In her presentation, Cernuda focused on brand attitude and a call to action, stating that, “brands should be brave and courageous to invest money in women.”

Then, Arancha Ruiz, a personal branding, talent, and headhunting consultant presented “Women Who Brand.” Ruiz focused on women’s personal brand. Showing a more group-focused attituded, her main message revolved around her statement that, «women need to talk about “us” more than “me”.» She also highlighted that only 1% of women in sports receive sponsorships.

Next up was the round table “Leading by Example, Clear Goals” with Julieta Verrier, Director of Marketing, Brand Management, Corporate at Stanley Black & Decker and Jaweria Ali, Gillette Brand Director. Both companies were sponsors for the events, and their representatives communicated that they as brands needed and wanted to create a positive impact on society by focusing more on people than gender. To fulfill these needs and be more inclusive brands, Gillette and Stanley Black & Decker announced that they are sponsoring women in sports.

Maria Teixidor, Secretary of the FC Barcelona Board of Directors and president of the Edelmira Calvetó Group gave the final remarks of the «Barça: Femení, Plural» event. Her words reiterated the importance and need to focus on a diverse sports center.

As it did at the HTAi event we attended in January, the live visual storytellings helped to capture the spirit of the event and engage the audience! The complete recording of this event can be found at Barça TV channel and event official photos at this link. 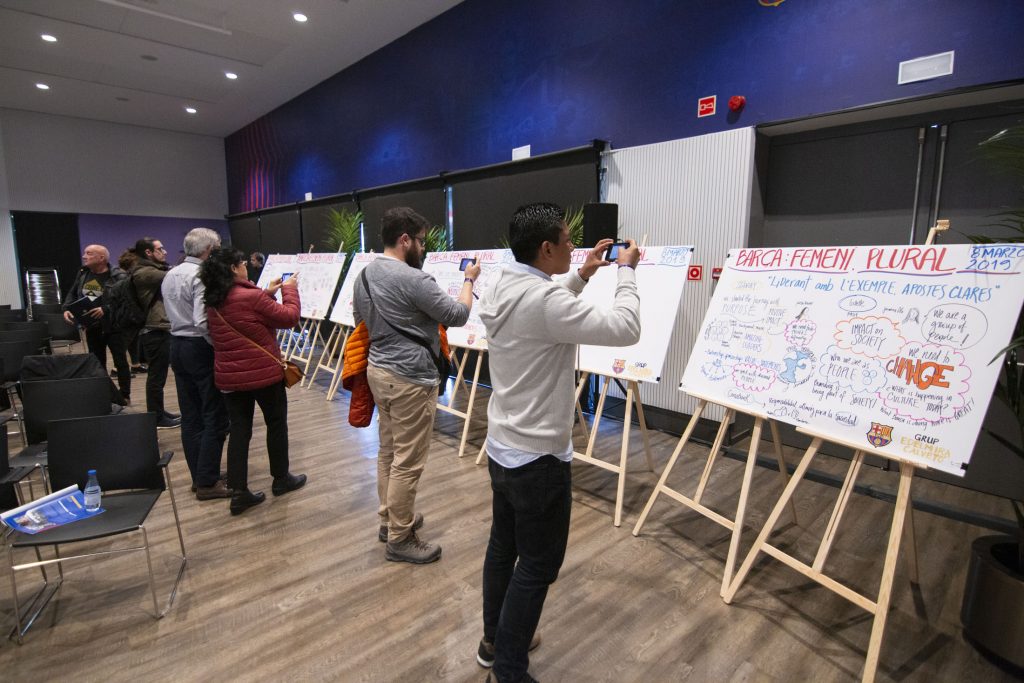 Prior to the event «Barça: Femení, Plural» we designed the artwork for the event’s communication. In order to have a consistent event branding and to match the look and feel of the live visual storytelling, we created hand-made illustrations to be used for all of the event’s promotion. This included event invitations, the website event program, the event app, printed programs, and the event day’s press release

It was an absolute pleasure working and teaming with this incredible organization and be apart of the FC Barcelona event, Barça: Femení, Plural! We truly want to thank Mrs. Maria Teixidor and her team for their confidence in our creative services and for their exquisite attention. It was such an unforgettable experience!

Visual Storytelling with a Human Touch in a Tech Environment

Design Thinking for a Creative and Collaborative Working Environment at HTAi

Visual Storytelling with a Human Touch in a Tech Environment